Love is an Art of Time 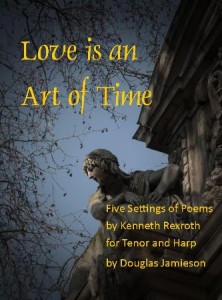 Love is an Art of Time was written in 1985. It was commissioned by and dedicated to James McLean and Gianetta Baril of the now disbanded tenor-harp duo Lyracord. It was composed with the much-appreciated financial assistance of the Ontario Arts Council.

Writing these five settings was one of my most positive commissions. James and Gianetta gave excellent performances – as you can hear in the premiere performance connected to this post – and they included the work in a tour of Ontario. More importantly, they gave me a lot of valuable guidance throughout the creation of the work. Gianetta, in particular, provided a lot of help with the daunting task of writing effectively for concert harp. The following recordings are from the premiere performance on March 8, 1985 by Lyracord:

3. Sharp in my heart

I had fallen in love with Kenneth Rexroth’s translations of Japanese poems, which prompted me to read Rexroth’s own poetry. When I did, I found several poems that were eminently singable. (Not all poems have that quality, to say the least, and many poems stubbornly refuse to cooperate with composers and, when set, seem to enter into a dysfunctional coupling, an unholy alliance.)

In 2012, my wife and I went to Paris, France. It was my first visit to the City of Lights and I thoroughly loved it. I felt very much at home in a place where such a high value is placed on both historic and contemporary culture. Listed in the Paris attractions was the Fontaine de Medicis in the Jardin du Luxembourg and I was reminded of the first poem I had set: “Now the moonless, starlit Spring”. Of course, we visited the Fontaine and the picture included with this post was taken by photographer wife, Elizabeth Cunningham.

This entry was posted in Chamber Music. Bookmark the permalink.