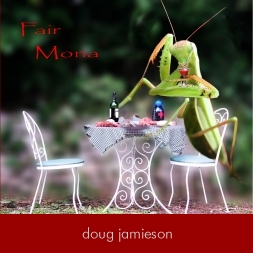 An elaborate construction – first conceived in 1992 – combining classical, straight ahead pop, and science-based spoken word. This piece had its genesis while reading a nature magazine about the sex life of bugs, snakes and other creatures.

The tiny male moth who flies miles to reach a mate finds the powerful scent of her pheromones to be irresistable. Irresistable to me was the chance to tell the story of mating praying mantises accompanied by the Liebstod from Tristan and Isolde. Alternating the classically-based music – some quoted, some original – which accompany the scientific readings, are verses of a pop song telling the story of a sexually insecure young man, craving to be with the fair Mona.

This performance features the late Lister Sinclair, a true polymath and one of the most renowned voices from the golden age of the CBC, reading the text. Lister was a delight to work with. He quite got into the irreverent spirit of the song and delivered a perfect performance. We met for coffee a few months after I finished the CD. He passed away the following year on October 16, 2006 at age 85.

This entry was posted in Eclectic Pop. Bookmark the permalink.